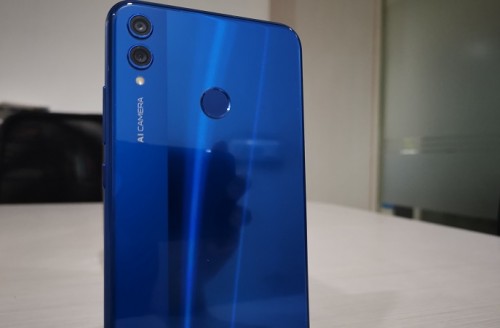 Chinese smartphone brand Honor recently launched Honor 9X in India, alongside the Honor Magic Watch 2 smartwatch and the Honor Band 5i. The Honor 9X succeeds the Honor 8X with new upgrades in terms of camera and processor.

Here is what we think about the smartphone after using it for a week.

In terms of design, the device scores decent marks. It packs a 6.59-inch full-HD (1080x2340 pixels) display with a notchless full-screen design.

The display is sharp and is good enough for gaming and content streaming. Moreover, it is bright enough even in harsh sunlight.

It looks fresh from the front thanks to its pop-up camera. The rear panel is made out of plastic and has a glossy finish, like most of the mid-price segment smartphones.

The three camera lenses are housed in a vertical strip, the USB Type-C port, speaker, and 3.5mm jack are at the bottom, while the SIM tray is at the top.

Coming to the cameras, the device has a triple camera setup with 48MP main camera with f/1.8 aperture and a large 1/2-inch CMOS sensor.

The camera performed really well in presence of proper light, while it struggled a bit in absence of decent amount of light.

Photos captured using the night mode exhibited better details and colours were brought out more. The contrast and the dynamic range are above average.

The phone also has a 16MP front camera with f/2.2 aperture inside the pop-up selfie module.

In terms of performance, the smartphone comes with a new Kirin 710F SoC.

The phone is available in two variants, with either 4GB or 6GB of RAM and 128GB of storage.

The general performance of the phone is decent. Browsing social media, watching movies, clicking photographs, and messaging are all smooth.

During the review, we also played two popular heavy titles like PUBG and Call of Duty without any issue at Medium graphics settings.

On the software side, the Honor 9X runs EMUI 9.1 based on Android Pie.

The smartphone comes equipped with a sufficiently long-lasting 4,000mAh battery.

On regular usage, with social media usage and a couple of hours of music streaming the device lasted for around two days on an average.

Conclusion: Honor is trying its best to make a long-lasting mark in this price segment and with this smartphone, the manufacturer has once again pushed itself to attain a solid footprint.

At the given price point, Honor 9X is a good bet for those who are looking forward to buy a phone with pop-up camera.