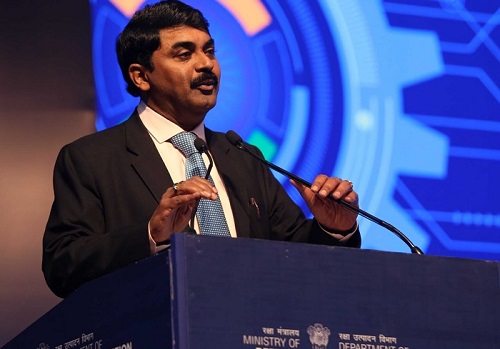 DRDO chief calls upon scientists to focus on next-generation needs

"The immense potential available in DRDO has been a catalyst for the development of industries in the defence manufacturing sector," the DRDO Chief said observing the 63rd Foundation Day of its establishment.

Reddy also met Defence Minister Rajnath Singh and presented him a model of Akash Missile System, which is recently cleared for export.

While addressing the scientists, Reddy said that the academic institutes, research and development organisations and industry need to work together on the advanced and futuristic technologies to make India self-reliant in the defence sector.

He mentioned that a number of SMEs and MSMEs are supplying small components to subsystems for all DRDO projects and have been nurtured by DRDO.

"Now they have become partners in all new developments," said the DRDO adding that that the institution conducts a competition dare to dream for startups and very enthusiastic response have been received.

He further added that at least 30 startups should be supported every year to develop innovative products for our forces.

He said that DRDO should make efforts towards strengthening long-term ties with the academia and aim to leverage the academic expertise available in the country and increase the synergy with them.

"DRDO should concentrate on applied research and translational research and then make prototypes from the applied research," Reddy said. He further said, that the industry should be in a position to adopt these technologies and have necessary infrastructure, and scale these up to market with sustained quality.

DRDO was established in 1958 with just 10 laboratories to enhance the research work in Defence sector and was tasked with designing and developing cutting edge defence technologies for Indian Armed Forces.

He also highlighted the contributions of DRDO during Covid pandemic and said that nearly 40 DRDO laboratories developed more than 50 technologies and over 100 products on war footing to develop products and technologies for combating the deadly disease in India.