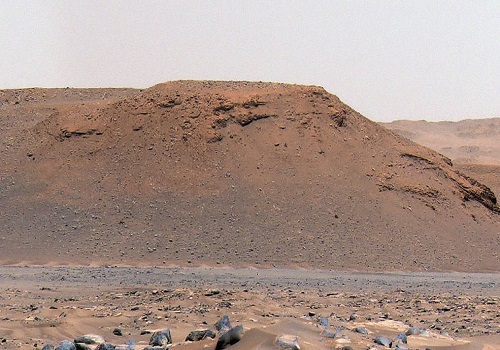 NASA's Perseverance rover, currently exploring Jezero Crater on Mars, has shared new insights which reveal that the Red planet had sustained interactions with water, according to a new study by the mission scientists.

Perseverance rover was launched on July 30 last year and arrived at the red planet on February 18 after a 203-day journey traversing 472 million kilometres.

Perseverance explored the floor of Jezero Crater, which was once a lake and a dried-out river delta at the crater's edge.

Based on the detailed images sent by the six-wheeler rover on Mars, the team has now published first scientific results about the Jezero Crater delta in the journal Science.

The images reveal that billions of years ago, when Mars had an atmosphere thick enough to support water flowing across its surface, Jezero's fan-shaped river delta experienced late-stage flooding events that carried rocks and debris into it from the highlands well outside the crater.

The rover provided images of long, steep slopes called escarpments, or scarps in the delta, which formed from sediment accumulating at the mouth of an ancient river that long ago fed the crater's lake.

Taken by the rover's left and right Mastcam-Z cameras as well as its Remote Micro-Imager, or RMI (part of the SuperCam instrument), the images also provide insight into where the rover could best hunt for rock and sediment samples, including those that may contain organic compounds and other evidence that life once existed there.

Further, on each of the scarps' steep walls and on top, Mastcam-Z and RMI captured stones and boulders.

"We saw distinct layers in the scarps containing boulders up to 1.5 metres across that we knew had no business being there," said lead author Nicolas Mangold, a Perseverance scientist from the Laboratoire de Planetologie et Geodynamique in Nantes, France.

Those layers mean the slow, meandering waterway that fed the delta must have been transformed by later, fast-moving flash floods.

Mangold and the science team estimate that a torrent of water needed to transport the boulders -- some for tens of miles -- would have to travel at speeds ranging from 6 to 30 kph.

The new paper also describes the size of Jezero's lake fluctuating greatly over time, its water level rising and falling by tens of yards before the body of water eventually disappeared altogether.

"This is the key observation that enables us to once and for all confirm the presence of a lake and river delta at Jezero. Getting a better understanding of the hydrology months in advance of our arrival at the delta is going to pay big dividends down the road," Mangold said.