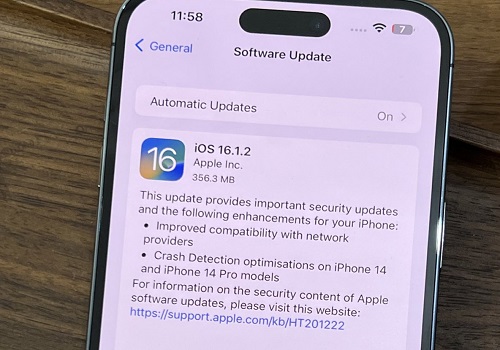 Apple has rolled out a new iOS 16.1.2 update for its devices, which includes significant security fixes and improves the reliability of the crash detection feature for iPhone 14 and iPhone 14 Pro users.

According to TechCrunch, the tech giant has not yet disclosed the nature of the security updates, as the company does not reveal security issues until they have been investigated or patched.

Apple launched the crash detection feature for its iPhone and Apple Watch users so that it can detect a car accident and dial 911 automatically.

While this feature has the potential to save lives in certain situations, users have reported instances where crash detection is falsely triggered while riding roller coasters.

However, in October, Apple released the first iOS 16.2 beta to developers, in which the company said that it will allow users to send a report to the company when Emergency SOS has been triggered unintentionally.

A notification will appear that opens the Feedback Assistant so that Apple can retrieve data about what happened.

"Did you intentionally trigger Emergency SOS on your iPhone?" the message reads.

Moreover, to update to the latest version of iOS, navigate to your iPhone's settings.

Then, click 'general', and then at the top of your screen, you should see a tab called 'software updates' that will allow you to check for new versions of iOS, according to the report.